According to Moonalice legend, at its height the Moonalice Bar & Bud Stop in present day Elko was the entertainment capital of northeast Nevada. The matriarch in those days was Red Lion Moonalice. Red Lion wasn't much to look at, but she was a great matriarch. Under her leadership the Bar & Bud Stop innovated like crazy. They created Ladies Night, where Ladies got in free and guys had to pay big time. They had an open mic night, where guys named Mike got in free. They also invented the sports bra. It was actually a sports bar, but the sign painter was dyslexic.

According to Moonalice legend, the great explorer (and bass player) Greyhound Moonalice liked to stop in Elko on his travels west and east. He said he like the Cowboy Poetry Museum. In fact, he liked it so much he opened a Moonalice Poetry Museum of his own. We consulted the Legend, but we could only find one poem. It goes like this.

According to Moonalice legend, today, April 4, is International Landmine Awareness Day. I don't know if landmines are a problem here in Elko, but we're not taking any chances. When you leave the show, watch out for land mines. 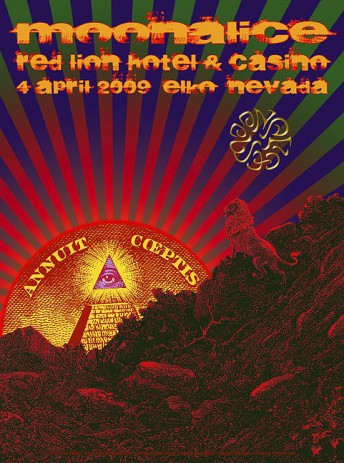