According to Moonalice legend, Little Fox Moonalice - the Moonalice matriarch who lived right here in Redwood City - was three handfuls and a hickey from the moment of conception. As a toddler, her favorite activity was to steal from the family bud supply to feed her basset hound, Chowderhead, a dog so chronically buzzed that he snored like a chainsaw even when he was awake. In nursery school, Little Fox used to tip over her classmates' bongs during nap time. By first grade, Little Fox had demonstrated three things: a brilliant intellect, an unlimited capacity for mischief, and a smile that broke hearts, but also got her out of trouble. She knew how smart she was - particularly in comparison to the tribe members of the male persuasion. Growing up, every boy fell in love with Little Fox. She was so clever that the boys hardly knew when she was making fun of them, which was all the time. She convinced the boys that if they wanted to kiss her, they would have to practice on each other. While this produced confusion at first, it ultimately led to some torrid romances among the boys. Meanwhile, Little Fox remained chaste, saving herself for someone with a really big bud.

According to Moonalice legend, today is the saint's day of William of Occam, an early pioneer in what would ultimately become the shaving industry. Are you familiar with Occam's Razor? This razor was sharp, smooth even. It stood the test of time. But it delivered a lousy shave. You see, Occam's Razor says is a piece of philosophy that says that all else being equal, the simplest explanation is most likely. That's deep, which is not normally a positive attribute from a razor. And so, the tribe celebrates ol' Bill. We think shaving is overrated.

According to Moonalice legend, today is the birthday of the great Junior Samples, whose 14 year tenure on Hee Haw made him a role model for many in the tribe.

According to Moonalice legend, today is the 135th anniversary of the first Arbor Day, which was celebrated in Lincoln, NE with the planting of one million trees. What history books don't tell you, is that the original idea for Arbor Day came from the ancient spring planting tradition in the Moonalice tribe. Every year, the tribe would celebrate the coming of spring by planting hemp in every nook and cranny. Europeans, whose colonial operations were based on the slash and burn techniques of the Mongol and Goth hordes, had never seen anyone plant anything besides vegetables. They thought it they could generate some good PR by appearing to do something good for the environment. But they were smart. They limited their good deeds - the planting of trees - to a single day every year, Arbor Day. The rest of the time, they did as nature intended: they wrecked the environment. Twittercast #3 Baked goods: cupcakes! 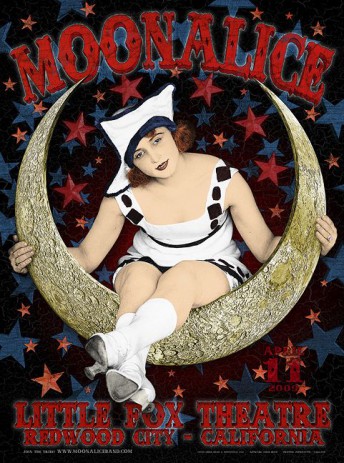