Share
Facebook
Twitter
+
VIDEO COMING
Previous Shows
Find           Show
Next Shows
River Ranch Lodge - Tahoe City, CA
view »
Main Street Festival - Arcata, CA
view »
Dead on the Creek - Laytonville, CA
view »
19 Broadway Nite Club - Fairfax, CA
view »
Gathering of the Vibes - Bridgeport, CT
view »
Summer Sounds - Greensburg, PA
view »
Jewels in the Square (Union Square) - San Francisco, CA
view »
Last Day Saloon - Santa Rosa, CA
view »
Veterans Home of California - Yountville, CA
view »
Applegate River Lodge - Applegate, OR
view »
VIEW MOST RECENT SHOW »
Don Quixote's - Felton, CA
view »
Jewels in the Square (Union Square) - San Francisco, CA
view »
Hi Dive - Seattle, WA
view »
WOW Hall - Eugene, OR
view »
Silver Moon Brewery - Bend, OR
view »
The Green Spot - Coos Bay, OR
view »
Stillwater - Ashland, OR
view »
Hangar on the Wharf - Juneau, AK
view »
Haines Fairgrounds - Haines, AK
view »
The Mint - Los Angeles, CA
view »
VIEW MOST RECENT SHOW »
Hop Monk Tavern IN SEBASTOPOL, CA
0
I was there
Buy Poster
Legend
Media
Comments
Who Was There?
According to Moonalice legend, Sebastopol was originally founded as a Moonalice experimental community. The notion was to promote free thinking and alternative lifestyles within a tribe that otherwise focused narrowly on hemp and bass playing. Judging by our drive through town today, the Sebastapol experiment has been a huge success. Sebastopol got started with Gravenstein apples, but then traded up to wine. As a complement to hemp, wine ranks right up there with Cheetos and Cherry Garcia. We also like Sebastopol's attitude towards relationships. The tribe has benefited enormously from your example. But we have a question for you: is it true that everyone in Sebastopol had sex in the hot tub before show?

According to Wikipedia, there is some confusion about the original of the name Sebastopol. Some say it was the result of a drunken wager. Others suggest aliens landed here and created a utopian community. Big Steve Parish claims that King Arthur was born here and he named it. Whatever the story, the apples and hemp around here are fantastic.

According to Moonalice legend, the perfect health regimen begins with a good night's sleep. The Medicine Man General - Dr. Parish - recommends that you not get up before noon. Begin your day with wrist curls as you first brush your teeth, then consume a refreshing Howling Monkey energizing elixer. Loosen up your fingers by checking out Moonaliceband.com, Facebook, and Twitter. Then roll a couple of fat ones. Test one to make sure they're okay. Then take a nap. We cannot emphasize enough the importance of getting enough sleep. Test another doobie to make sure it hasn't gone bad while you were napping. Have something to eat. Repeat the above as necessary until you pass out.

According to Moonalice legend, on this day in 1888, one of the first recordings ever made was played at a press conference to promote Thomas Edison's phonograph. You know what it was? Arthur Sullivan's The Lost Chord. The highlight of the press conference was Edison's demonstration of the use of an album cover as a platform for rolling doobies.

We will need to consult the Legend to be sure, but it appears this was our first show with 6 -- SIX!!! -- bass players. 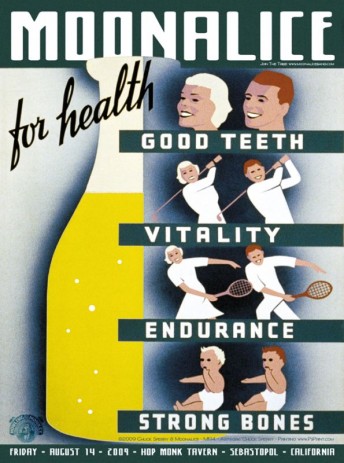