According to Moonalice legend, this venue is on the site of one of the great myths of the Moonalice tribe. Long, long ago, in a galaxy far away The Truckee River Monster terrorized the proto-Moonalice tribe that lived in these parts. The Monster was huge and it ate a proto-Moonalice a day for months at a time. Legend has it that a brilliant young proto-Moonalice named Mary Jane proto-Moonalice ended the reign of terror. She baited trap with a bale of fine bud and trapped the Monster, which got so buzzed it left town never to return. The proto-tribe was overjoyed and immediately put Mary Jane in charge. She was a great leader. Her crowning achievement was to get rid of the whole proto thing. She did that at precisely 4:20pm on April 20th of the year zero. Unfortunately, it appears the tribe was not using calendars back then.

Today, August 13, is Mary Jane day. According to Moonalice legend, the earliest Moonalice tribe -- the one led by Mary Jane -- was agricultural. They grew vegetables and hemp and lived happily on the shore of Lake Tahoe. But they had no music. One day a small band from an obscure tribe - the Rocks - came to the Moonalice village. They had three guitars, keys, drums, percussion and seven bass players. Mary Jane invited the band for dinner in exchange for a gig. It was a huge success. The Rocks enjoyed the Moonalice ritual after dinner smoke and then played their best gig ever. Mary Jane fell in love with one of the bass players, who decided to become her consort. Their progeny form the original DNA of the Moonalice tribe. Today's poster by David Singer depicts the First Matriarch of the Moonalice tribe: Mary Jane Moonalice. 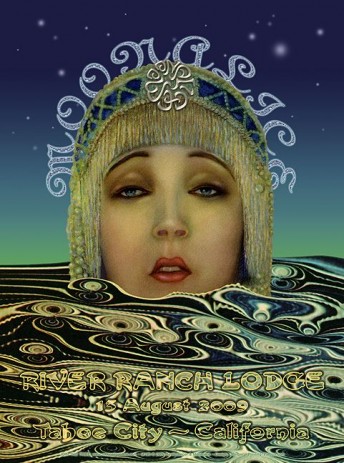