According to Moonalice legend, Richmond has been the site of many great moments in tribal history. You may not realize it, but the Moonalice tribe had a great "business" relationship with the Masons of Virginia in the days before the American Revolution. Many of those Masons went on to be Founding Fathers. The Legend provides particularly valuable insights about a major event in Richmond: Patrick Henry's "give me liberty or give me death" speech before the House of Burgesses.

Controversy exists because there is no transcript of the speech. Nonetheless historians give credit to Henry for motivating the House of Burgesses to support the rebellion. That is true, but it's not the whole story.

The Legend makes it clear the Patrick Henry made a great speech, but the famous quote was not part of it. It was actually a response to an audience question after the speech. The question? "What are your favorite brands of hemp?" Liberty was a sativa from the local Moonalice tribe. Death, as its name implies, was an indica. It came from the plantation of the noted hemp farmer, George Washington. Moonalice and the Founding Fathers: partners in agriculture.

According to Moonalice legend, time waits for no one. When no one shows up, what happens then? 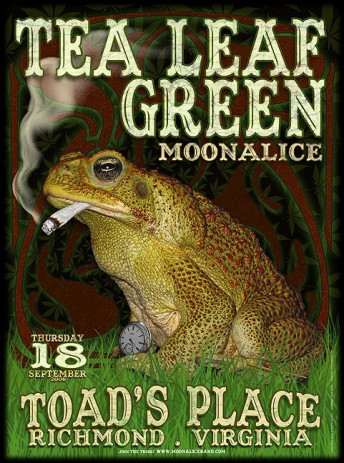