History books don't say, so we consulted the Moonalice legend. The Moonalice tribe first settled here at least 2,000 years ago. The area provided a fantastic environment both for the tribe's agricultural clan, the hippies, and for its nomadic clan of musicians, the bands. Since the dawn of time, Moonalice hippies have farmed the land, but their specialty has always been that most American of crops, hemp. From way back, the tribe demonstrated its sophistication, producing special hemps for rope, for fabric, for paper, and for entertainment. And then the Europeans arrived. Before long, real estate prices shot up and the tribe was forced to move to Mendocino and Humboldt. They left behind the hills, but took their Yerba Buena with them. The rest, as they say, is legend.

According to Moonalice legend, October 5 did not happen in the year 1582 in Spain, Portugal, Poland, and Italy. The day got lost in the switch to the Gregorian calendar. We celebrated by taking the rest of the day off.

In recognition of the economic crisis, Big Steve proposed a new benefit for Moonalice fans: a dental plan. Big Steve is offering five years of dental coverage to any Moonalice fan. There is only one catch: the service is only available from Big Steve himself. We note that Big Steve never went to dental school and he offers only two services: extractions and "modifications". However, he does use Sears Craftsman tools - the power drill is his favorite - and he promises to wash his hands at least once a day. 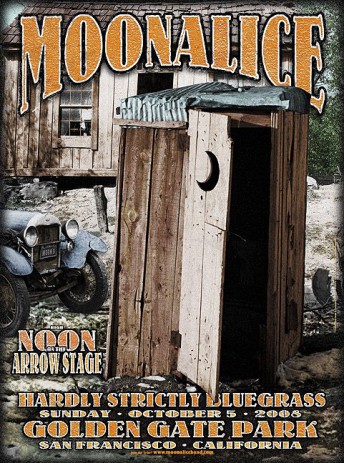