According to Moonalice legend, when someone says jump, you answer, "how high?" and then take another hit.

According to Moonalice legend, harvest season is a time for a little hard work and lots of celebration. The Moonalice tribe has never been ambitious. It certainly doesn't like hard work. As a result, the heavy lifting of the harvest is - by tribal tradition - confined to a single weekend, known as Labor Day Weekend. Once the crop has been brought in from the fields, there is still lots of drying and curing, but that doesn't stop the tribe from celebrating. The hippies supply the hemp, the bands supply the music. We're the band. We hope you guys are the hippies.

According to Moonalice legend, the original harvest festival was the result of an industrial accident. A few thousand years ago, Moonalice agriculture was still primitive, and they typically dried the crop in the field. One tribe member was assigned the job of watching over the crop. This particular Moonalice tribe made the mistake of assigning Screwloose Moonalice to this important security position. Ol' Screwloose had the IQ of lug nut and started playing with matches. Next thing you know, he set the crop on fire. The Tribe rushed into the field to try to stomp out the flames, which turned out to be a whole lot of fun. Everybody got totally wasted, but they saved enough of the crop to call the day a success. And so began the custom of burning a whole lot of hemp at harvest time.

According to Moonalice legend, fall foliage is nature's version of the lava lamp. It provides tribe members with something to stare at as they slip into unconsciousness.

According to Moonalice legend, Woodstock was a fake. The festival came a month after Neil Armstrong's walk on the moon and was recorded on the same soundstage in Arizona. We raise this because the bus went by the Bethel Music Museum, which purports to be the site of Woodstock.

The festival took place in the only place in America where a teenager can learn trapeze. 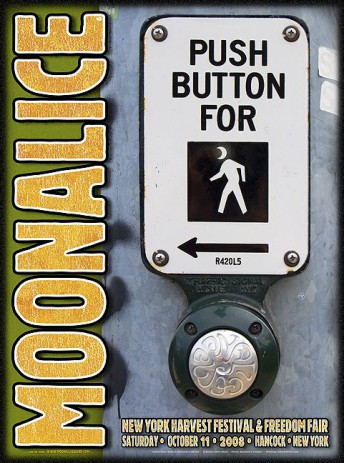