According to Moonalice legend, Missouri was a late adopter of hemp agriculture. This changed in the early 19th century when the great Matriarch Zoe Moonalice brought her band to this very spot. The band's Conestoga wagon had a flat tire here on the way from St. Louis to Kansas City, so they pulled up to put on the spare. A small crowd of locals came out to help, after which Zoe offered to repay them with a free concert. Afterwards, the band and audience gathered for the post-show hang. Zoe pulled out her bong, lit it up, and passed it around. The Missourians had never smoked hemp products before and were skeptical about the whole hemp thing. Fortunately, one of Zoe's bandmates was from Missouri. Show Me Moonalice explained the importance of hemp to the assembled multitude. He demonstrated the use of the bong, inhaling until he coughed his lungs out. Then he started giggling. That broke the ice. The locals tried the bong and liked it. Soon, they wanted the recipe. Next thing you know, hemp agriculture spread throughout Missouri. In appreciation, the locals named this place after the woman who made it all possible. That's how it came to be known as Camp Zoe.

According to Moonalice legend, Mark Twain's real name was Samuel Clemens Moonalice. As a boy, he made a raft out of hemp stalks, launched it on the night of the full moonalice, and floated down the Mississippi River in search of the Holy Bale of Hemp. He didn't find it. Ol' Sam got intercepted by a bunch of River Pirates, all of whom looked like Johnny Depp, Keira Knightly and Oliver Bloom. After the ritual exchange of "Arghs", one of the pirates whacked Sam over the head with a bunch of bananas and demanded his hemp stash. Sam offered to trade a couple of buds for some bananas. After a few minutes of haggling, a deal was made and Sam continued downriver. For the record, Sam concluded that smoking banana skins was thoroughly unsatisfactory.

According to Moonalice legend, today is the sixty-sixth anniversary of the discovery of LSD by Dr. Albert Hoffman. 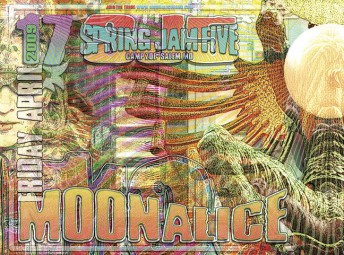