According to Moonalice legend, when Frank and Jesse James robbed the Glendale train, the bartender in the club car on that train was named Big Iron Moonalice. Big Iron served beer, whiskey, and hemp buds. Business was slow that day, so Big Iron shared a few doobies with a guy at the bar. By the time the robbery happened, both Big Iron and guy were too wasted to notice that everyone else on the train was either dead or running for their lives. This kind of thing happens all the time to the Moonalice tribe. Worse still, Big Iron was finally awoken by a nasty bunch of Pinkerton detectives, all of whom looked like the alien love children of Dick Cheney and Barbara Bush. What happened next was too awful to describe. The morale of the story: never wake a sleeping doobie.

According to Moonalice legend, today is the anniversary of both the Great San Francisco Earthquake of 1906 and Paul Revere's Ride in 1775. It was also Ashley's birthday. 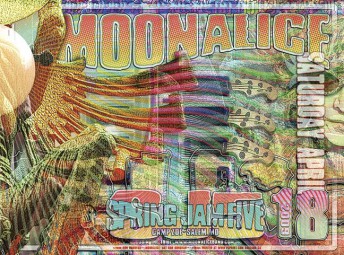