According to Moonalice legend, today is the 199th birthday of Beethoven's composition "Fur Elise." It turns out that Elise was not even remotely furry, but she was all Moonalice. She had a very green thumb. Apparently her agricultural prowess contributed to Beethoven's creativity. God knows it has been indispensible to generations of parents forced through their children's endless performances of Fur Elise.

According to Moonalice legend, today is the 250th birthday of Mary Wolstencraft, a Moonalice matriarch who wrote books and practically invented feminism. She was the mother of Mary Shelley, the woman who wrote Frankenstein.

According to Moonalice legend, Arlington County used to be run by the Moonalice tribe. How do we know? Wikipedia says the county misplaced a town in 1930. Who but the Moonalice tribe could lose a whole town? Apparently, the locals got really buzzed and forgot where they put Potomac, which soon became known as the lost town of Virginia. Fortunately, Potomac was eventually rediscovered by the National Register of Historic Places. Apparently they are keeping a really close eye on the place to make sure it doesn't disappear again.

According to the American Podiatric Medical Association, Arlington is the best city in America for walking. According to Moonalice legend, it is also a fine city for the consumption of tribal herbal entertainment.

According to Moonalice legend, Arlington used to be part of the District of Columbia. In the first half of the 19th century, the district had two counties, the southern of which was Arlington. After nearly fifty years as part of the District, residents of Arlington petitioned Congress to rejoin Virginia. Wikipedia says the locals wanted to preserve slavery. The Moonalice legend has the real story. In those days, Arlington harbor was very active in all manner of trade. It was a particularly big player in the hemp trade. The locals anticipated that Congress would eventually get really weird about hemp and decided to hitch their wagon to Virginia. 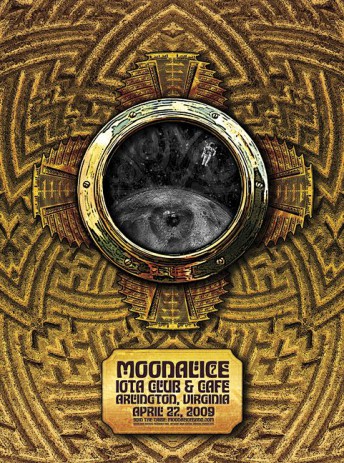