According to Moonalice legend, Sullivan Hall has played a huge role in Moonalice tribal music. By tradition, this is the place where tribal bands break out. Who can forget the incredible appearance of the Moonalice group, The Peoples, back on February 9, 1964? That show would have triggered a Peoplemania sensation had it not been for the national TV debut that same night of a similarly named band from Liverpool. The Brits took advantage of the confusion to change the course of music history. Meanwhile the Moonalice band spent the rest of its days trying to figure out whether or not Paul was dead.

According to Moonalice legend, today would be the 132nd birthday of Alice B. Toklas, companion to Gertrude Stein and an early pioneer in hemp cuisine. Alice's brownie recipe is iconic within the tribe. We don't have any here tonight, but we do have cupcakes.

According to Moonalice legend, tonight is the Bealtaine Eve, the beginning of Ireland's celebration of the beginning of summer. Tradition calls for huge May Bush bonfires, which ensure a bountiful harvest later in the year. For obvious reasons, the Bealtain bonfires of the Moonalice tribe didn't begin with a May bush. No, no, no. In the early days, they were built of whatever shake, stems and seeds happened to be left over from the long hard winter. Eventually, the tribe figured out that the best Bealtain bonfires were small personal ones, usually in the form of a bong hit or doobie. Baked goods: cupcakes!! 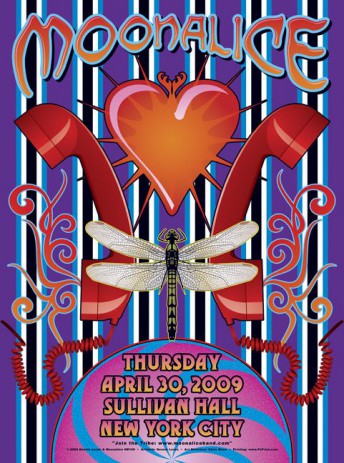