According to Moonalice legend, the tribe made many other contributions to the railroads. Boxcar Tilly was the very first hobo. She passed out in a box car near Baltimore in 1840 and woke up 40 years later, having missed about 150,000 miles of travel, plus the Civil War. But no one made a greater contribution to development of rail travel than Sir Humidor Moonalice, the English tribe member who invented both the smoking car and the refrigerated box car, better known as a "reefer".

According to Moonalice legend, a Moonalice matriarch named Red Queen Moonalice ruled here in Crystal Bay in the 19th century. Red Queen was a great visionary - she saw Crystal Bay as a center for (shall we say) a highly evolved form of Moonalice culture. When white people first came in 1848, Red Queen recognized the threat to tribe's way of life. So she made up some line of bull that there was gold near Sutter's Mill. Before you knew it, the white guys grabbed their shovels, bought some Levi's, and took off. The next time the white guys showed up, about twenty years later, she made up more cock 'n' bull about silver near Virginia City. Boom. The white people took off again. By the time a third wave of white people came, though, Red Queen had passed the mantle of leadership to her son, Two-A-Clubs Moonalice. Two-A-Clubs was a few high cards short of a deck, and didn't appreciate the nuances of his mother's strategy. He told the next wave of white people that there was no more gold or silver, but they could find low tax rates and nice casinos in state of Nevada. And so the white people stayed forever.

According to Moonalice legend, today is the 149th birthday of JM Barrie, author of Peter Pan. The tribe has no idea what Barrie was taking when he first wrote Peter Pan, but we want some!!!!

According to Moonalice legend, May 9 is also the 141st birthday of Reno. The community is actually much older, but the name was changed on May 9, 1868 by Charles Crocker, construction superintendant of the Central Pacific Railroad, who apparently anticipated the creation of National Train Day and decided to cash in. 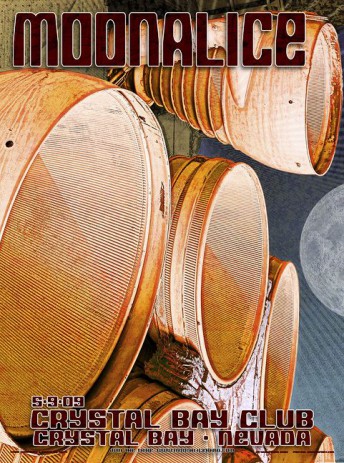