According to Moonalice legend, tribal culture is managed according to the rules of the Geneva Convention. I'm not talking about the Geneva Convention that governs treatment of prisoners of war, civilians, the wounded, and the shipwrecked. I'm talking about the one that was created right here in Geneva, Minnesota at the zero hour of the first Moonalice era. That Geneva Convention codifies laws about bass, hemp, and Confusionism. It states that a bass guitar can have as many strings as you like, but four is best. It says you can consume as much hemp as you like, but it is best to share. And it reminds us that Confusionism says that since we can't predict the future, we should make sure to have a good time in the present. All hail the Geneva Convention.

Tonight's poster - by Alexandra Fischer - depicts Bella Madre Moonalice. Bella Madre was the first matriarch in the first Moonalice era. She presided over the Geneva (MN) Convention and cast the deciding vote in favor of four strings on the bass.

According to Moonalice legend, today, May 23, is World Turtle Day. Today is a day to celebrate turtles, tortoises, and all four legged critters in shells. Scientists celebrated yesterday by finding a previously unknown tribe of 40,000 leatherbacks on the coast of Gabon. We will celebrate by pacing ourselves and enjoying today to its fullest.

According to Moonalice legend, today, May 23, has historically been a tough day for tough guys. On this day in 1701, the English hanged Captain Kidd. In 1934, police killed Bonnie and Clyde. In 1945, Heinrich Himmler committed suicide. 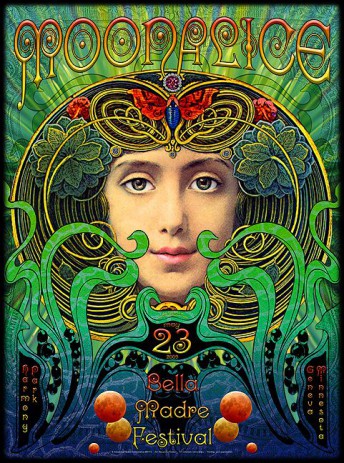