According to Moonalice legend, Lizzie Borden hired live-in servants to care for her parents. The two servants, Forty Whacks Moonalice and his son, Forty-One Whacks, were nice, but not very alert. They were passed out cold - having shared some bud in the family hemp cellar - when the axe was flying upstairs. Forty Whacks was mortified by the bloody murders, but Forty-One Whacks was smitten. His love for Lizzie knew no bounds. Not only did he cast himself as Reasonable Doubt in the musical version of Lizzie's court case, he grew and marketed a strain of hemp that helped to pay Lizzie's legal bills. The hemp, known as Steel Lizzie, left smokers with a splitting headache. It was very popular among masochists.

According to Moonalice legend, the worst fire in Fall River's history started in the Pocasset Mill in 1928. By the time it was put out, the fire had destroyed a big part of downtown Fall River. How did it start? This is where history gets sketchy and the legend takes over. Unfortunately, it says nothing about how the fire started. What it provides is an interesting perspective on the importance of leaving a burning building before the cows come to roost. Guest percussionists: Webb McNamee, Schwager, Stella Xanthakos Baked goods: birthday cake!!! Twittercast #5 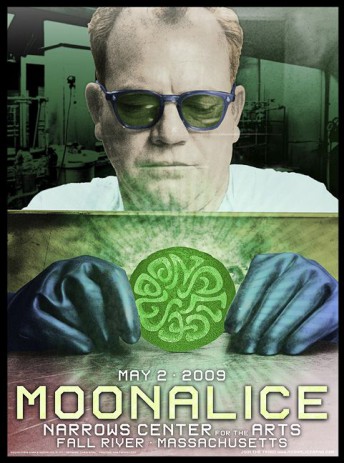