According to Moonalice legend, the tribe around Point Arena was led by a matriarch by the name of Gualala Moonalice. Gualala was a traditionalist and great leader. Beginning in the 19th century, she warned that fishing, lumber, and tourism were fly by night industries doomed to failure. She recommended that the tribe focus on traditional agriculture, specifically the cultivation of hemp. Here we are, more than 100 years later, and Gualala's prediction has come true . . . the tribe's ancient crop now represents the best hope for saving the economy of California.

On this day in 1886, King Ludwig II of Bavaria died under mysterious circumstances. Known to history as Mad Ludwig, the King was famous for building fantasy castles around Bavaria, one of which became the model for the castle at Disneyland. He was also the patron of the composer Richard Wagner. According to Moonalice legend, Mad Ludwig was Moonalice on his back side. Apparently that was the side of Ludwig that got him killed by the Disloyal Opposition.

According to Moonalice legend, Point Arena is the northernmost home to the Pacific Giant Salamander. The Salamander apparently refuses even to visit Caspar or Fort Bragg. The tribe is exceptionally tolerant on all matters of personal choice. As far as we're concerned, the Salamander is free to live wherever it wants. 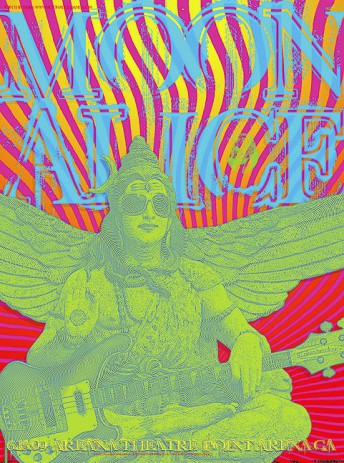