Share
Facebook
Twitter
+
VIDEO COMING
Previous Shows
Find           Show
Next Shows
Arena Theater - Point Arena, CA
view »
Bonnaroo Festival - Manchester, TN
view »
Wakarusa Festival - Ozark, AR
view »
Wakarusa Festival - Ozark, AR
view »
Summer Camp Music Festival (5) - Chilicothe, IL
view »
Bella Madre Festival (5) - Geneva, MN
view »
Crystal Bay Club (Crystal Bay Casino) - Crystal Bay, NV
view »
The Mint - Los Angeles, CA
view »
Narrows Center for the Arts - Fall River, MA
view »
Mexicali Live - Teaneck, NJ
view »
VIEW MOST RECENT SHOW »
Applegate River Lodge - Applegate, OR
view »
Applegate River Lodge - Applegate, OR
view »
Veterans Home of California - Yountville, CA
view »
Last Day Saloon - Santa Rosa, CA
view »
Jewels in the Square (Union Square) - San Francisco, CA
view »
Summer Sounds - Greensburg, PA
view »
Gathering of the Vibes - Bridgeport, CT
view »
19 Broadway Nite Club - Fairfax, CA
view »
Dead on the Creek - Laytonville, CA
view »
Main Street Festival - Arcata, CA
view »
VIEW MOST RECENT SHOW »
Goodfoot Pub & Lounge IN PORTLAND, OR
0
I was there
Buy Poster
Legend
Media
Comments
Who Was There?
According to Moonalice legend, the tribe around Portland has a problem with rabbits. I know this is hard to believe, but it's true. The tribe loves bunnies, particularly the big ones with floppy ears and wide faces. But one member of the tribe got carried away and is spoiling the bunny scene for everyone. You may have seen the news that Portland's own Bunny Lady, Miriam Sakewitz Moonalice, was arrested in Tigard yesterday when a hotel housekeeper discovered zillions of bunnies hopping around her room. Our hotel here in Portland offers free goldfish, but apparently that wasn't enough for Miriam. Despite a restraining order that required her to stay at least 100 yards away from any rabbit, Miriam had acquired a veritable herd prior to her arrest. Speaking for the tribe, we want you to know that as much as we like Miriam, we believe she went too far. For example, the tribe is totally against putting bunnies in the refrigerator. When that happened a few years ago, the tribe sent Miriam to bed without any hemp. The tribe knows no punishment more severe than that. And that was for a first offense!

According to Moonalice legend, the early years of tribal agriculture in Oregon were fraught with challenges. The tribe got its start well south of here, before the white man built the city of Portland. So when demand grew for hemp products, the tribe had to figure out how to transport it to the big city. Taking a page from the lumber industry, the local Moonalice tossed their plants into the Willamette in the hope that they would float to Portland. That didn't work. So then they tried putting hemp on a boat. Nobody knows what happened, but that didn't work either. Then the great matriarch, Rose City Moonalice, made a brilliant suggestion. She said, "How about if we forget shipping and just smoke it ourselves!" Problem solved!

According to Wikipedia, Portland lies on top of an extinct Plio-Pleistocene volcanic field known as the Boring Lava Field. According to Moonalice legend, there is no such thing as a boring lava field. All lava fields are murderous . . . terrible for the hemp crop.

According to Moonalice legend, many strange things have happened on June 17. In 1462, Vlad the Impaler - the role model for Dracula - staged his famous Night Attack on Mehmed II. In 1939, the French used the guillotine for the last time. In 1972, the Watergate burglers botched their break in. And in 1994, we all saw OJ Simpson's low speed Bronco chase. 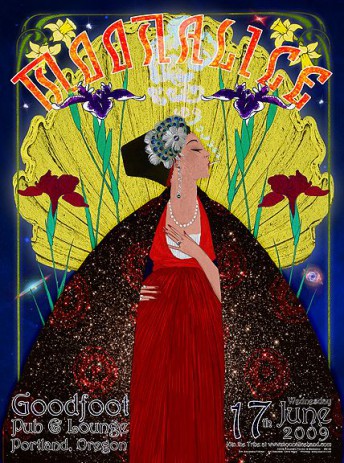