According to Moonalice legend, the town of Fairfax was home to the annual Moonalice hemp rodeo. It was a small town affair with lots of spirit. The local growers gathered in mid-July to compare their product. Favorite events included Bud Wrangling, one-handed doobie rolling, and the ever-popular Bong Hit Roping, where the winner is the one who can hold the most smoke for the longest time. But the payoff event at every hemp rodeo was the One Toke Over the Line Puff Marathon. By the time it was over, half the town was passed out in the ring. The last Hemp rodeo was over a hundred years ago, but the trime has come to bring it back.

According to Moonalice legend, today is the anniversary of Black Tot Day in the United Kingdom. Black Tot has nothing to do with Shorties. Black Tot refers to the official ration of rum provided each day to every seaman in the Royal Navy. They used to buy a shitload of rum in the Royal Navy, but that changed in 1970, when the Navy stopped picking up the tab. Some claim the change was due to cost cutting or misplaced "family" values. But the legend suggests another explanation. What if the Royal Navy wanted to switch to something less dangerous than rum? Hemp perhaps? Consider the facts. They ended the Black Tot in 1970. Hemp weighs far less than rum, which is good news on a ship. Hemp is not addictive. Hemp can be grown in England, unlike rum. It's obvious. To celebrate, we recommend you do as the Navy did: splice the main brace! This is Navy talk for double rations.

According to Moonalice legend, today is Hawai'i Flag Day. Hawaii has had 8 flags since 1793, all but one with the English Union Jack. In a few weeks, we celebrate the 50th anniversary of Hawai'i's statehood. Say what you will about the Eisenhower Administration, they gave us both Alaska and Hawai'i. The Moonalice tribe thinks that is more than enough. 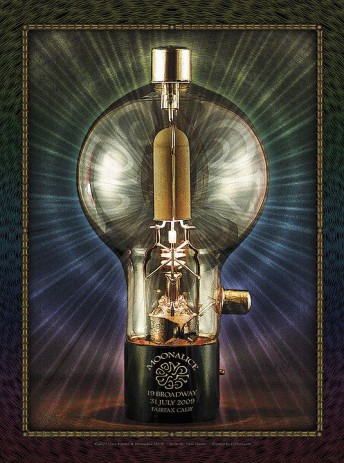