According to Moonalice legend, today is Bastille Day, which is not only the anniversary of the French Revolution, but also of the day when Pat Garrett shot Billy the Kid. On this day in 1771, Father Junipero Serra founded the Mission San Antonio de Padua. The mission, in the sticks of Monterey County, is famous for the first use of fire-tiled roofing on a California mission. Have you ever wondered where they got the idea for a fire-tiled roof? It turns out that the local Moonalice tribe had a special tribal bong that fired up five pounds of bud on a bed of clay. The whole tribe inhaled continuously for hours, after which they were fully baked, as was the clay, which was shaped like half pipes that worked really well for target practice. When he saw the tiles, Father Serra realized that they would make for a snazzy mission roof, so he offered eternal salvation in exchange for them. Knowing a good deal when they saw one, the tribe went into the fire-baked tile business.

According to Moonalice legend, San Francisco used to be known as Yerba Buena. Our first reading of the legend gave us the mistaken impression that the Yerba Buena name was stolen from the tribe without compensation. That was not the case. Based on follow up research, we have reason to believe the Roman Catholic Church actually cut a deal with the tribe. You see San Francisco isn't really named for St. Francis of Assisi. It's named after St. Francis of Moonalice, the patron saint of rolling papers. 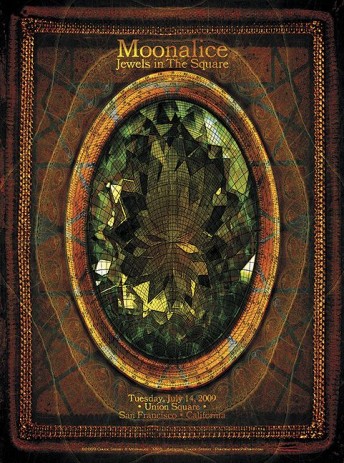