 Our flight here was precisely 4 hours and 20 minutes long

 The town next door is Hempfield

 Your town is Greensburg

Can this possibly be a coincidence? We think not!!!

According to Moonalice legend, the tribe had schools around the country where the most promising young Moonalices would go for secondary education in the fine arts of playing bass and rolling fat ones. Our study of the legend reveals that one such institution was located near here. Hempfield High was the Hogwarts of the Moonalice tribe. We understand that Hempfield High has lost its name, but it will never lose our mind . . . or its place in the hearts of the Moonalice tribe.

Today's poster shows the great matriarch Halo St. Clare Moonalice. Her name was Halo, but she called herself Lil, and everyone knew her as Nancy. According to Moonalice legend, Halo Moonalice dedicated her life to education. A couple hundred years ago, she came to Hempfield Township and founded the original Hempfield High. It was Halo who came up with the critical insight that bass players get all the girls. She also proved that when a bass player leaves his keys in the car, it will take two hours to get the drummer player out. She was also the first educator to insist that students remove stems and seeds before rolling.

According to Moonalice legend, today is National Tequila Day. Don't say we didn't warn you.

According to Moonalice legend, today is the 61st anniversary of the first appearance of Marvin the Martian in a Bugs Bunny cartoon. Today's is also the 26th anniversary of George Brett's pine tar incident. If she were still alive, Amelia Earhart would be 111 today. And she would still be lost. 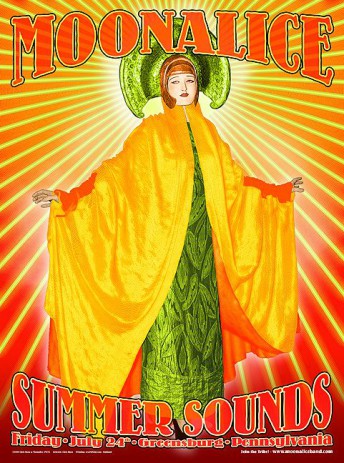