According to Moonalice legend, the Brewers' sausage races are decended from an ancient Moonalice harvest ritual. Back in the 19th century, the Moonalice tribe in these parts used to compete to see who produced the best hemp. In the early days, the Hemp Harvest Queen would sample all the entries and pick a winner. Unfortunately, the Harvest Queen usually passed out before she got through the evaluation process. They tried using lots of Harvest Queen's, but with the same result. So in the end, someone suggested a race. The farmers each dressed up as a doobie and ran around a field. The Italian Doobie won most of the time, but that was because it cheated.

According to Moonalice legend, Milwaukee is an urban heat island. Urban Heat Islands have an average nightly temperature is significantly higher than the surrounding areas. Don't know about you, but we thought this sounded very suspicious. Not the heat part. That makes sense. But are people in Milwaukee significantly higher than folks in the surrounding areas? We can confirm that the only town in Wisconsin that rivals Milwaukee in terms of elevation is Madison, which is where we'll be on Sunday.

According to Moonalice legend, tonight's poster depicts Mrs. O'Leary's bull. This is the one that left town after the Great Chicago Fire, moved up here to Milwaukee and started brewing "light" beer. 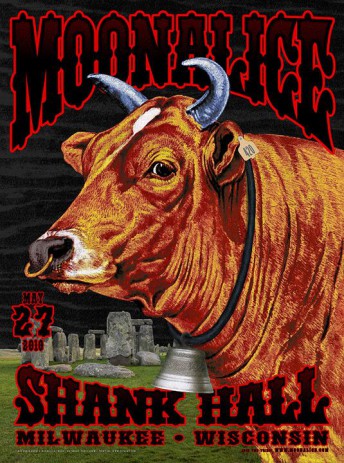