According to Moonalice legend, the accepted explanation of the origin of 4:20 is that it originated at the Louis Pasteur statue at San Raphael High School in 1971. Some maintain that a search for hemp plants on Mount Tam figured in the story. The Moonalice Legend thrives on controversy, so we would like to create some. Long, long ago, in a galaxy far, far away, Lucky Moonalice imagined a number between 419 and 421. The rest is legend.

According to Moonalice legend, President Abraham Lincoln wrote a letter during his presidency stating that one of his favorite things "sitting on [his] front porch smoking a pipe of sweet hemp."

According to Moonalice legend, this is Sky Awareness Week. We want you to be aware that when you go outside and look up, the thing above you is the sky. The big round thing is the Moon. That's where our tribe hails from.

According to Moonalice legend, on this day in 1836 - 4/20/36 - Congress created the Wisconsin Territory. 150 years later, the 420 area code was assigned to Wisconsin. Coincidence? We think not! 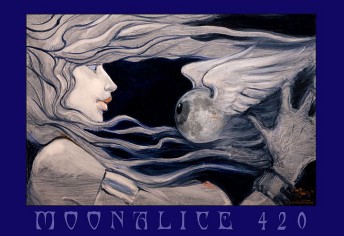