According to Moonalice legend, the tribe has long believed in the power of balls. After an initial battle with double entendres - which led to a baby boom in the late 19th century - the tribe experimented with many kinds of balls. They started with seasonal balls, the biggest of which was the Harvest Festival every October. They also threw a Baseball in the summer and a Snowball in the winter. Someone suggested they try numbers, which led to the every popular 8 ball. Then came colors. The Brown Ball was kind of gross, but the Green Ball emerged as a one-of-a-kind event to honor the thing that sustains us all, namely hemp. Or in your case, the earth.

According to Moonalice legend, we are all Friends of the Earth. Sadly, there aren't enough of us. For reasons I cannot explain, the Earth has fewer friends on Facebook than Coca-Cola, which might have made sense before 1900, when Coca-Cola was green got you high, but it is crazy now.

According to Moonalice legend, on this day in 1881 Clara Barton founded the American Red Cross. The initial plan was to have a second organization called the American Green Doobie - which would have been a nationwide chain of pot clubs - but the white folks freaked out. 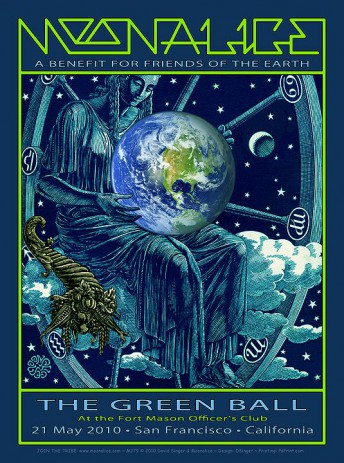