According to Moonalice legend, the tribe loves baseball. And Moonalices feel a special kinship the Cubs, thanks in part to pride in our tribe's role in Chicago baseball. Have you ever wondered how they built Wrigley Field in only six weeks back in 1914? Hemp. Lots of hemp. And a work crew of Moonalices, of course. Then in 1937, the great Bill Veeck, who was a Moonalice on his mother's backside, covered the walls with green plants. He began by planting hemp. It was cheap, grew fast, and could be sold at a profit. Unfortunately, that first crop matured in early May, was cured and enjoyed by the ground crew. That's when Veeck planted the ivy.

According to Moonalice legend, today is the anniversary of the first execution of a witch in the US. It happened in 1647 to a woman named Alse Young. How did they know Alse was a witch? She had no sons when her husband died, which meant she was legally entitled to inherit his estate. More recently she has been accused of cultivating hemp.

According to Moonalice legend, today would have been the 98th birthday of Harold J. Smith on the Six Nations reservation in Ontario. Doesn't ring a bell? How about Harold's stage name: Jay Silverheels? None other than the man who played Tonto in the Lone Ranger TV series in the 50s. The man who did NOT say, "what do you mean 'we', White Man?" Happy birthday, Jay!!

According to Moonalice legend, tonight's poster (by Chris Shaw) depicts Howling Monkey the First, a pioneer who had three lives. In his first live, Howling the First was an astronaut chimp who came to an unfortunate end in the early days of NASA. In his second life, Howling the First was a test monkey for hallucinogenics during the MK Ultra program. They fried his brain and put him to sleep. Howling the First then achieved glory when he discovered the beneficial effects of vitamins combined with huge doses of caffeine. The rest, as they say, is legend. 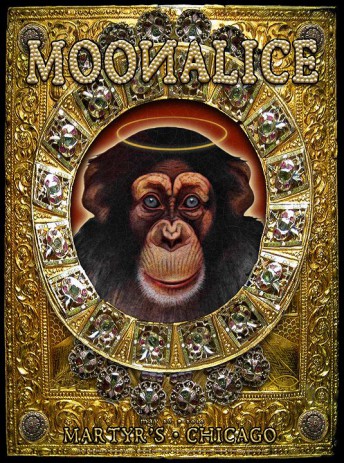