The first sentence in the Wikipedia entry for Thanksgiving says "Thanksgiving Day is a harvest festival." That is the first clue, but the Legend tells us more. A long, long time ago, a small Moonalice enclave in what is present-day San Francisco had a tradition of cooking extravagant meals for High Holy Days. Unfortunately, different families controlled each holiday. The guy who had the last harvest festival in November was a really nice guy, but a lousy cook. His name was Butterball Moonalice and he was determined to invent a system that told you when your food was done without you having to watch it. For many years, he experimented with hemp seeds, using their popping as the signal. Butterball added a few seeds each time, but it was never enough. Year after year, the turkey burned to a crisp. Butterball's tribe was patient, but eventually they told Butterball to try something else. So he used gunpowder. When the Turkey blew up, it took Butterball with it.

The tribe didn't have dinner that year, but at least they had something to look forward to. And they called it Thanksgiving.

According to Moonalice legend, the day after Thanksgiving is known as The Day After Thanksgiving. Traditionally, the tribe stays home and consumes mass quantities of hemp. 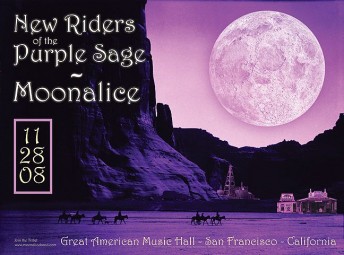