Share
Facebook
Twitter
+
VIDEO COMING
Previous Shows
Find           Show
Next Shows
19 Broadway Nite Club - Fairfax, CA
view »
Auburn Events Center - Auburn, CA
view »
KMVR - Nevada City, CA
view »
The Ashkenaz - Berkeley, CA
view »
Applegate River Lodge - $10 show - Applegate, OR
view »
John Henry's - $4.20 Tour - Eugene, OR
view »
Domino Room - Bend, OR
view »
Dante's - $4.20 Tour! - Portland, OR
view »
Tractor Tavern - $10 show - Seattle, WA
view »
Arena Theater - New Year's Eve!!!! - Point Arena, CA
view »
VIEW MOST RECENT SHOW »
Temecula Theater - Temecula, CA
view »
The Mint - Los Angeles, CA
view »
Brixton South Bay - Redondo Beach, CA
view »
Brooklyn Bowl - $5 adv/$7 door - Brooklyn, NY
view »
Killington Ski Resort - K1 Lodge - Killington, VT
view »
Amos Tuck School - Dartmouth College - Hanover, NH
view »
Harpers Ferry - Boston, MA
view »
Moe's Alley - Santa Cruz, CA
view »
Lincoln Theater - Yountville, CA
view »
Hop Monk Tavern - Sebastopol, CA
view »
VIEW MOST RECENT SHOW »
The Coach House IN SAN JUAN CAPISTRANO, CA
0
I was there
Buy Poster
Legend
Media
Comments
Who Was There?
According to Moonalice legend, history books tell you all about the migration of swallows to San Juan Capistrano, but no one has ever explained why they come here instead of somewhere else. Fortunately, the Moonalice legend has the answer. The swallows came here for the same reason that missionaries did: for the hemp. In the centuries before Europeans arrived, Moonalice hippies grew their finest hemp along the coastline here. Swallows from Argentina made their seasonal migration to enable their young grow up in a hemp-rich environment. Unfortunately the missionaries did not share the swallows' or Moonalices' enthusiasm for hemp. They built a mission here and put an end to hemp nonsense. Apparently Moonalice and the swallows are endlessly optimistic. Tonight we are here for the first time. If all goes well tonight, the swallows will be here tomorrow. According to Moonalice legend, the first Zorro story was set in San Juan Capistrano. Zorro is a great figure in Moonalice legend. Our tribe loves pirates, the Johnny Depp kind of pirates, and Zorro was a land pirate. While we aspire to Zorro-ness, we identify more with Sergeant Garcia, the TV show's clueless foil. Sergeant Garcia was part Moonalice and was known for the prodigious amounts of hemp he consumed. What we can't understand is where he got his weight problem and cluelessness. According to Moonalice legend, today is Awkward Moments Day. It's embarrassing, but I don't know what to say. According to Moonalice legend, today is the 51st anniversary of President Eisenhower signing into law the statehood of Hawaii. We think the statehood of Alaska and Hawaii make President Eisenhower one of the great presidents of all time. No president ever did more to expand America's vacation land!!! According to Moonalice legend, the name Orange County is the result of a massive cover-up. As shown on tonight's incredible poster by David Singer, this entire area was a bountiful Moonalice hemp farm for centuries before the Europeans arrived. In those days, the Moonalice name for this area was Green County. Sadly, the missionaries just didn't appreciate the benefits of hemp over oranges. They just preferred a brighter color.

According to Moonalice legend, the name Orange County is a cover-up. In the old days before the missionaries, oranges were not an important crop. The only crop that mattered was hemp. And the place was called Green County back then . . . but the missionaries put an end to that. 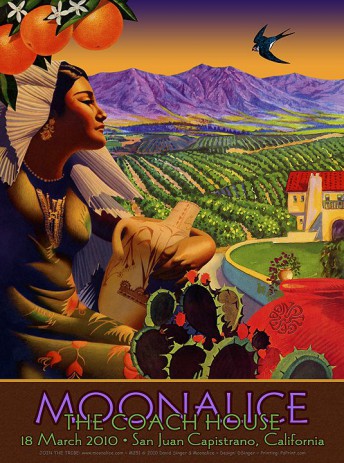