Share
Facebook
Twitter
+
VIDEO COMING
Previous Shows
Find           Show
Next Shows
Dante's - $4.20 Tour! - Portland, OR
view »
Tractor Tavern - $10 show - Seattle, WA
view »
Arena Theater - New Year's Eve!!!! - Point Arena, CA
view »
142 Throckmorton Theatre/Seva Benefit - Mill Valley, CA
view »
Hopmonk Tavern - Sebastopol, CA
view »
19 Broadway Nite Club (5) - Fairfax, CA
view »
Crystal Bay Casino - Crown Room (5) - Crystal Bay, NV
view »
Great American Music Hall - Benefit for Rex Fdn - San Francisco, CA
view »
Skipper's Smokehouse - Tampa, FL
view »
Magnolia Festival - Live Oak, FL
view »
VIEW MOST RECENT SHOW »
John Henry's - $4.20 Tour - Eugene, OR
view »
Applegate River Lodge - $10 show - Applegate, OR
view »
The Ashkenaz - Berkeley, CA
view »
KMVR - Nevada City, CA
view »
Auburn Events Center - Auburn, CA
view »
19 Broadway Nite Club - Fairfax, CA
view »
The Coach House - San Juan Capistrano, CA
view »
Temecula Theater - Temecula, CA
view »
The Mint - Los Angeles, CA
view »
Brixton South Bay - Redondo Beach, CA
view »
VIEW MOST RECENT SHOW »
Domino Room IN BEND, OR
0
I was there
Buy Poster
Legend
Media
Comments
Who Was There?
According to Moonalice legend, today is Temporary Insanity Day. It is the anniversary of the first successful temporary insanity defense against a murder charge. It should surprise no one to learn that the defendant was a member of Congress, Daniel Sickles, who killed his wife's lover in the park across from the White House. The lover was the district attorney of the District of Columbia; who turned out to be the son of Francis Scott Key. Sickle the proto-OJ got off with the temporary insanity defense. He went on to fame and infamy in the Civil War. As a general at Gettysburg, he disobeyed orders and moved his corps to position at which it was crushed by the Confederates. Sickles lost his leg to a cannon ball at Gettysburg, but survived the war to live a long and productive life. What is the lesson here? The Moonalice legend suggests that you decide for yourself.

According to Moonalice legend, today is the 122nd anniversary of Thomas Edison's patent filing for the phonograph. Think about all the amazing things enabled by that invention. The phonograph transformed music, offering unimaginable leverage to musicians. It has also changed the world in a few less well known ways. Right here in Bend, a young tribe member named Billiken Moonaice used the phonograph as a centrifuge to clean the seeds from his hemp. Billiken, who is pictured here, was great great grandfather to a brilliant Moonalice Matriarch named Sisters Moonalice. She was the person who figured out that the spindle adapter for a 45 rpm record could be used as a roach clip.

According to Moonalice legend, the best thing about the Winter Olympics is women's curling. It's a game of finesse and strategy played by people who know what they are doing and look funny while they are doing it. The game is played with a stone. One of the members of the US team is named Pottinger. Winner has to buy drinks for the loser. Our kind of game.

According to Moonalice legend, today is the anniversary of the day when the first rescuers reached the Donner Party. They brought dessert. 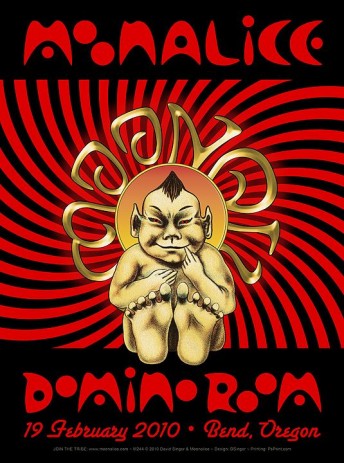