According to Moonalice legend, Sebastopol is home to the Luther Burbank Gold Ridge Experiment Farm. Has any of you ever been to the Luther Burbank Gold Ridge Experiment Farm? Do you know what goes on there? We have never been there, but here are the facts. What they do there is secret. Do you think they put ridges on Ruffles? Maybe, but we doubt it. The farm is only 3 acres. What can you grow in three acres? There is only one crop we know that produces huge value on a farm that small. We're just saying . . .

According to Moonalice legend, tonight's poster depicts the late, and overweight tribal patriarch Jackie Gleason. Before he grew the unfortunate moustache, Jackie was a bus driver and Honeymooner. His abuse of Alice directly influenced the naming of this tribe, which makes tonight's poster - by the incredible David Singer - particularly meaningful. Did Gleason enjoy hemp? As far as we're concerned, he invented the stuff.

According to Moonalice legend, Sebastopol has the perfect climate for agriculture. It started with hemp, of course, continued with plums, then Gravenstein apples, and now grapes for wine. We want you to know that we are very impressed with your versatility, but the surgeon general recommends that move away from high sugar fruits like apples and grapes in favor of a crop that gets you high. 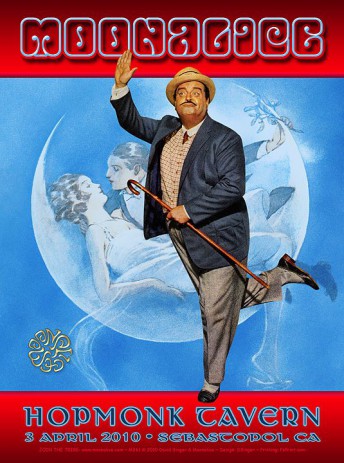