According to Moonalice legend, Auburn was home to Ikeda Moonalice, a tribal matriarch who specialized in pies. Like the Sirens of Scilla and Charybdis, Ikeda's pies have lured unsuspecting visitors to Auburn and then added inches to their waist lines without them knowing. Have you ever wondered how she did this? She used hemp butter in her crust, which caused customers to eat the whole pie. Works every time.

According to Moonalice legend, March is National Caffeine Awareness Month. For those of you who are not aware of caffeine, it's a legal stimulant found in tea, coffee, some soft drinks, and our very own Howling Monkey Energizing Elixer. The tribe considers caffeine to be a food group.

According to Moonalice legend, today is the birthday of Rob Reiner, Mary Wilson of the Supremes and David Gilmour of Pink Floyd. It's also independence day in Ghana. Anyone here from Ghana? No problem! The tribe will celebrate anyway!!! 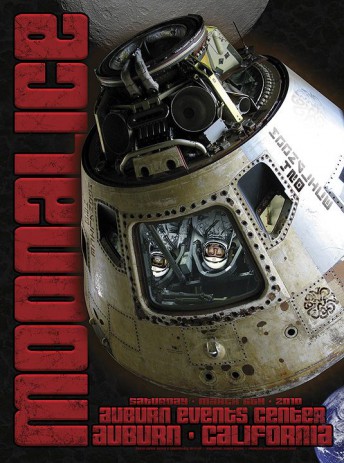