According to Moonalice legend, the greatest of all Winter Olympics sports is curling. It is the official spectator sport of the Moonalice band. If you haven't seen any on TV, we strongly recommend it. Curling is game of strategy and finesse played by men who are pudgy and women who are often beautiful. It is a drinking game - winner buys - but we note a clear connection to the Moonalice tribe. The thing you throw in curling is called a stone. Also, it is one of the few competitive sports where men and women can play together. It is our understanding that in mixed games, the winner buys both drinks and dinner. What happens after that is a mystery.

According to Moonalice legend, February is National Marijuana Awareness Month. It is also National Condom Month and Spunky Old Broads Month. This is obviously a great time of year for Spunky Old Broads with a bag of weed and box of condoms.

According to Moonalice legend, today is the 80th anniversary of the day when Elm Farm Ollie became the first cow to fly in an airplane. She was also the first cow to be milked in a plane, producing an impressive 24 quarts in her first flight, which went 72 miles. They sealed the milk in containers and dropped them via parachute to thirsty cereal eaters on the ground below. 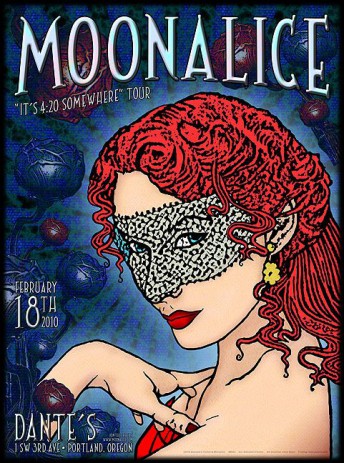