According to Moonalice legend, downtown Seattle burned to the ground in a massive fire in 1889. Moonalice legend suggests that the fire started at 4:20pm when two young Moonalices dropped burning embers from their doobie on a pile of hay. The tribe always felt guilty about that. Until today. We just found out that the fire had been burning for nearly two hours at 4:20pm, and that it had started when a guy in a furniture shop set a vat of glue on fire. Let that be a warning to you. Glue is dangerous. Stick to hemp products.

According to Moonalice legend, yesterday was the 30th anniversary of Ann's and my first date. We got off to an excellent start: it was a Jerry Garcia Band show at the University of New Haven Gym in New Haven, CT. I remember the smoke being thick that night. Marrying Ann was the Best decision I ever made. Jerry only lasted 15 years, but we are still rocking after 30.

According to Moonalice legend, the weather in the Seattle area is suboptimal for the cultivation of hemp. Apparently it rains a bit here. No matter. A local member of the tribe by the name of Windows Moonalice figured out a solution. He invented grow lights. Unfortunately, he also invented artificial turf, which he called Astro-hemp, but that was less successful. Two puffs and there was no point in calling a doctor. The best you could do was to call a lawyer who specializes in mesothelioma.

According to Moonalice legend, today is the 77th anniversary of the Blaine Act, which was the beginning of the end of the Prohibition of alcohol in the United States. Unfortunately, enlightenment lasted only four years, until the passage of the Marihuana Tax Act of 1937. Fortunately, the tribe pays no attention. Welcome to our world. 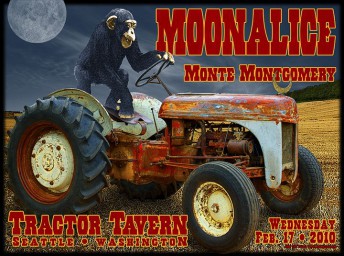