According to Moonalice legend, today is the 92nd anniversary of the day when Father Flanagan started Boys Town in Nebraska. The goal of Boys Town was apparently two-fold: to create a farm village for wayward boys and to create a movie script for Spencer Tracy. A farm village for wayward boys sounds like a promising concept for the Moonalice tribe, but no one knows what they grew there. It's worth noting that Boys Town's most famous alum was Charles Manson, who claims to have gotten everything he needed from Boys Town in only four days, after which he felt prepared to make his mark on the world.

According to Moonalice legend, the early white settlers arrived in Mill Valley to find the Coast Miwok tribe. The Miwoks were cool, and long time pals of the Moonalice tribe. Unfortunately, they were slow to figure out the white peoples' program and fell victim to it in a way that the Moonalice avoided. You see, the Miwok were smart and hardwork. The white people liked that. First thing you know, they (quote) converted (unquote) the Miwoks to Catholicism and put them to work as (quote) indentured labor (unquote). With the Moonalice, the story was totally different. The Moonalice smoked hemp, played bass and spent most days in a stupor. The White people took one look and decided to become Republicans. 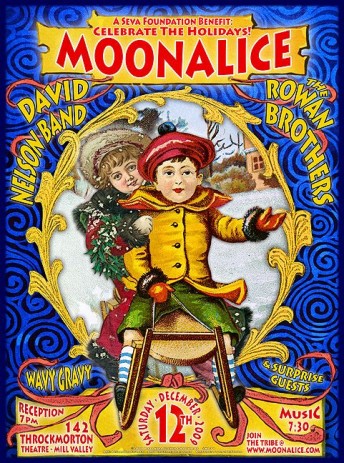