According to Moonalice legend, today is the 335th anniversary of the founding of Chicago, Illinois by Jacques Marquette Moonalice. History claims that Father Jacques was there to minister to the Illiniwek tribe, but the legend tells the real story. Father Jacques was a terrible farmer and couldn't play a lick on bass, but he was one hell of an importer. The Illiniwek had never experienced the wonders of hemp until the Good Father arrived from Europe with a huge brick of hash. The Illiniwek decided he was a god and immediately asked him to move in. The rest, as they say, is legend.

According to Moonalice legend, today is the anniversary of the martyrdom of Santa Barbara. Legend tells us that Santa Barbara traveled the world on Christmas Eve, delivering gifts of hemp to Moonalice boys and girls. As the patron saint of people with the munchies, Santa Barbara was known to consume giant bags of Cheetos and quarts of Ben & Jerry's in a single sitting. Over time, she put on a lot of weight, which eventually became a problem on Christmas Eve. She got stuck in a chimney and never got out.

According to Moonalice legend, on this day in 1867, a retired farmer by the name of Oliver Kelley Moonalice founded the National Grange of the Order of Patrons of Husbandry, a fraternal organization of farmers that survives to this day. The idea behind the Grange was to create a way for farmers to work together for their collective good. Among its many accomplishments, the Grange was responsible for the creation of the first head shops in America. Sadly, they didn't have enough political weight to stop the Marihuana Tax Act of 1937. The best they could do was to get Congress to pass the Hemp for Victory Act at the beginning of World War II. 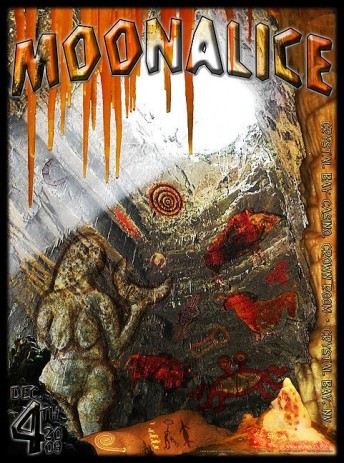