According to Moonalice legend, the tribe's band - us - has gone through a metamorphosis in recent weeks. We are now a quintet. We think of ourselves as the High 5. If we want to get high with someone, we just use the traditional band greeting.

According to Moonalice legend, today, December 5, is a high holy day in the Tribe. On this day in 1933, Utah became the 36th state to ratify the 21st Amendment to the Constitution. Do you remember the 21st Amendment? It ended Prohibition. Alcohol may only be a back-up form of entertainment in the Moonalice tribe, but we stand up for the rights of drinkers!!! We believe everyone should be free to imbibe whatever entertainment they can handle without bothering anyone. By the way, it is traditional for the tribe to celebrate this great anniversary by smoking up a storm.

According to Moonalice legend, December 5 is the Day of the Ninja. Originally created to promote the whole Ninja vs. Samurai fighting thing, it has evolved into a International Creep Like a Ninja Day, a Ninjas vs Pirates celebration which some people consider an alternative to International Talk Like a Pirate Day. Ridiculous. No matter how sneaky, no day can match Talk Like A Pirate Day. Arrrr!!! 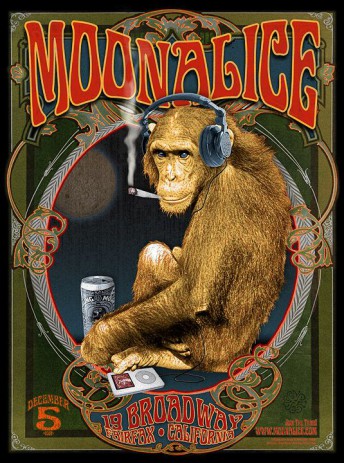