According to Moonalice legend, tonight's poster features Apple Pie Moonalice, daughter of Hopmonk Moonalice, an early resident of these parts. Apple Pie was a real sweetie. Her baked goods were so fantastic they were only known within about a mile of here. You see, Apple Pie's baked goods had a secret ingredient which left the muncher with an unshakable feeling of peace on earth and good will towards men (and women). It produced such an overwhelming euphoria that no one ever shared the secret. We're told, however, that it has been passed from mother to daughter through generations . . . and may be with us here tonight!

According to Moonalice legend, the aforementioned Apple Pie Moonalice - the one from tonight's poster - could bake anything, but she was particularly skilled at brownies. She had several specialty brownies:  The Blue Hawaiian - it was a macadamia nut hemp brownie with a slice of pineapple and a tiny Chinese parasol -  The Henry - which was based on Acapulco gold and caused instant blindness  And finally, the coup de grace: The Sugaree - this tasty morsel was based on a local herb known for its smooth taste and strong finish If any of you has an extra one of these treats handy, we hope you will share.

According to Moonalice legend, on this day in 1972 Apollo 17 landed on our home plutoid, the Moon. The astronauts had a really cool rover and tooled around for several days. One of the things they brought back with them was a tablet that is sacred to the Moonalice tribe. On the tablet is inscribed the One Commandment: Don't Do anything I wouldn't do.

Nick of Time is not to be missed!!! 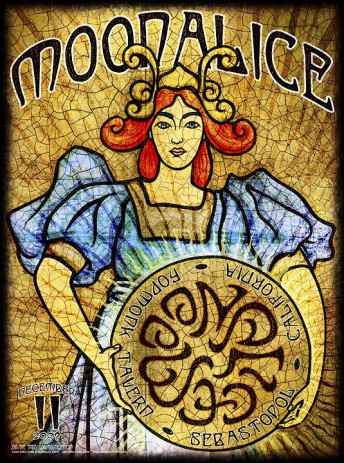